If you’re interested in running Mac OS X, but you don’t want to pay ridiculous prices for a normal Mac, then a Hackintoshjust might be for you. Right now, the newest iteration of OS X is 10.10, known as Yosemite. In this guide, we’ll show you how to install Yosemite on your PC with the nely released “Yosemite Zone” distro, from Niresh.

The advantages of Unibeast vs. Yosemite Zone
Yosemite is a distro, which is a pirated copy of Mac OS X that has been modified to work with a PC. Distros are a popular Hackintosh alternative to Unibeast, a better-known installation tool which requires a retail copy of Mac OS X instead.

Yosemite Zone is essentially just a renamed version of the Niresh distro that we’ve covered previously on this website, except it has been updated to work with Apple’s newest version of Mac OS X. Using Yosemite Zone instead of Unibeast offers a far share of advantages– if you don’t have any qualms with the legal issues regarding distros, they’re actually the most convenient way to set up your Hackintosh:

Follow this step if you’re setting up Niresh on a Mac or existing Hackintosh. Plug your USB drive into Mac OS X, and open Disk Utility (located in Applications->Utilities in your main hard drive). Select your USB drive in the sidebar of Disk Utility and erase the drive, with the “Format” set to “MS-DOS (FAT)”. You can rename the drive any way you want. 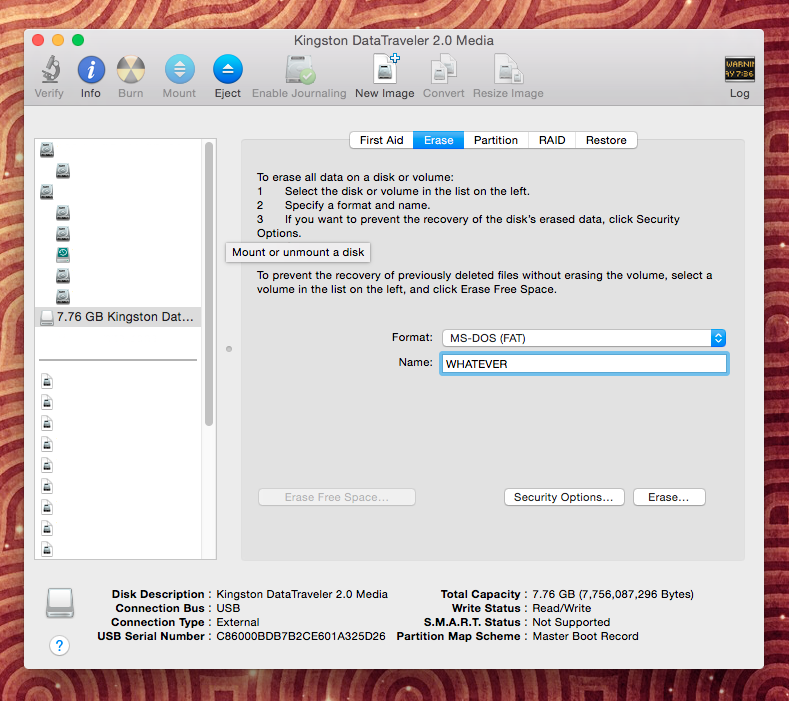 Double click on “Restore Yosemite.pkg” to start the app. By default, the app will be aimed at your computer’s main hard drive (mine is named “Super Panda” in the screenshot below). You do not want this– instead, click through the installer until you reach the page with the “Change Install Location” button. 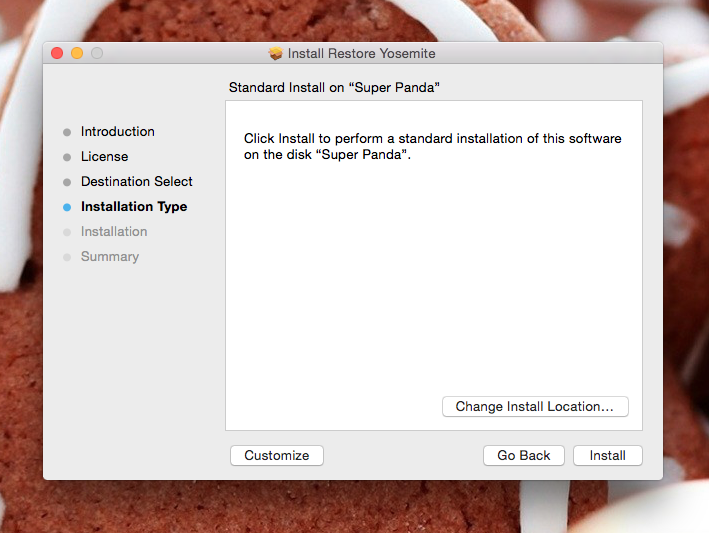 From here, change the install location of the app to your USB drive (mine is named “Macaroni” in the screenshot below). 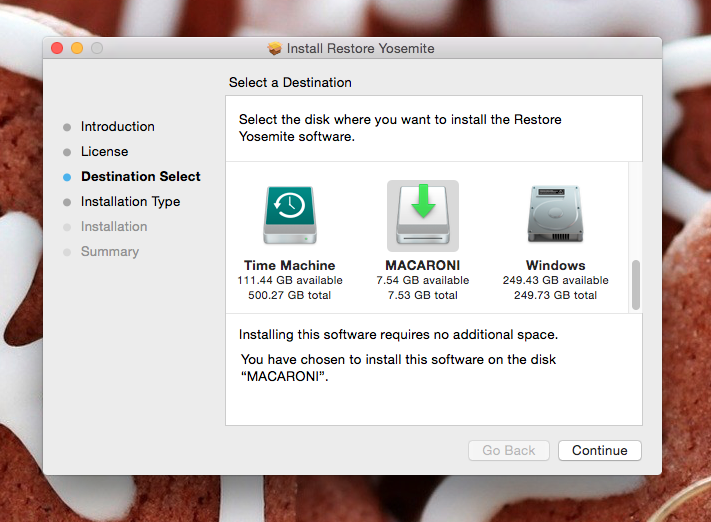 Press the enter/return key. The app will ask for your system password. After you enter your password, it will begin writing the Yosemite Zone disk image onto the USB drive. This will probably take 20-40 minutes, though it may take longer, depending on the speed of your USB drive. Once it finishes, your USB drive will contain a fully bootable version of the OS X Yosemite installer.

NOTE: “Restore Yosemite.pkg” is very glitchy. If you can’t find the “Change Install Location” button on the first time that you run the app, restart your computer and re-run the app.

Follow this step if you’re setting up Yosemite Zone on Windows. Plug your USB drive into your computer, and open TransMac. Find your USB drive on the left-hand column of the TransMac window. Right-click on the USB drive, and click “Format Disk for Mac”. This will delete all of the files on your drive and prepare it for Mac OS X. 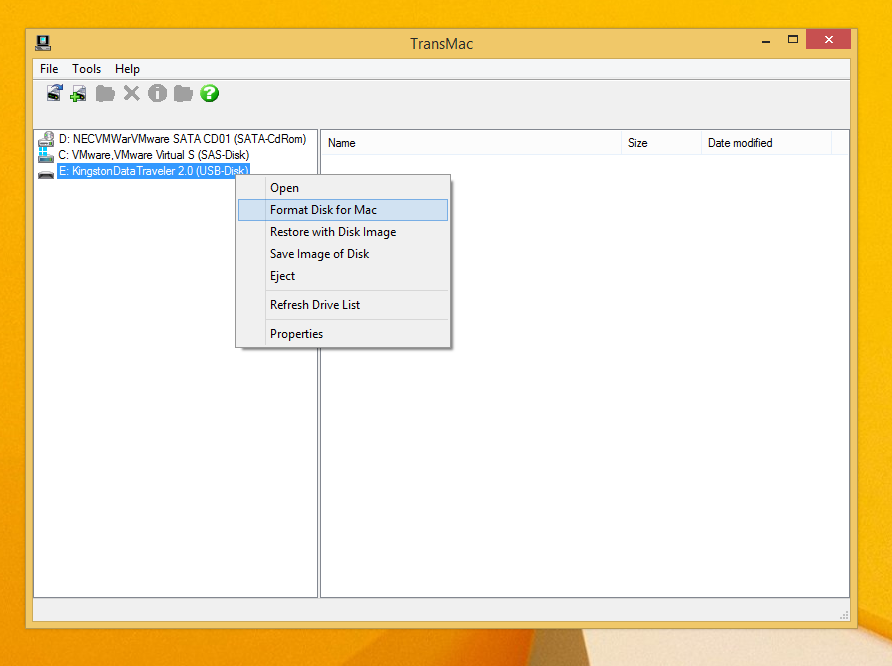 Once your USB drive is done formatting, right-click it again and click “Restore with Disk Image”. A file selection window will pop up; choose your Yosemite Zone disk image file (it will probably be called “Yosemite-Zone.dmg”), and proceed. Now, TransMac will write Yosemite Zone onto your USB drive. 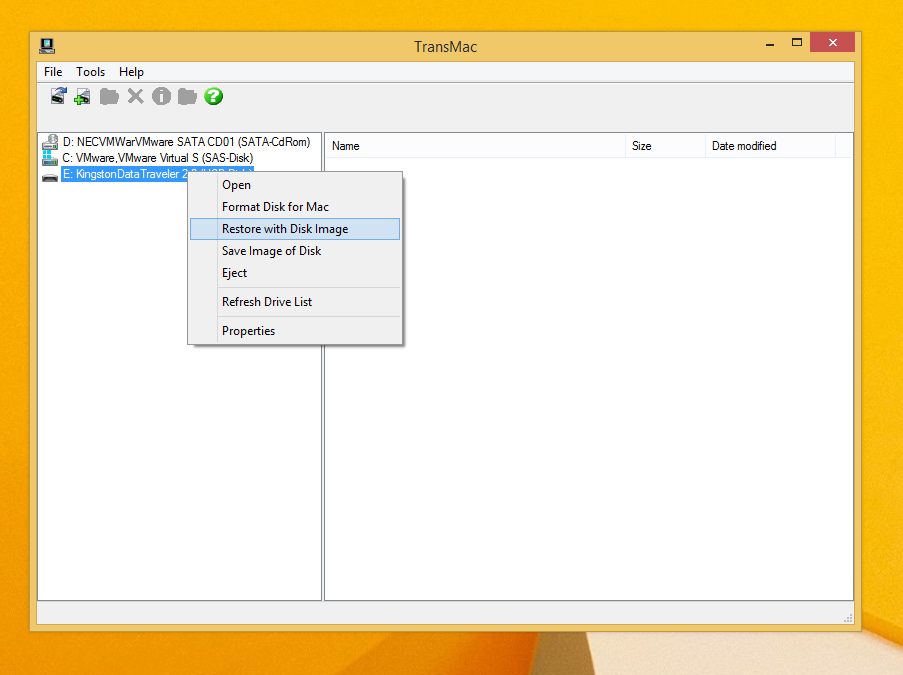 This will probably take 20-40 minutes, though it may take longer, depending on the speed of your USB drive. Once TransMac finishes, your USB drive will contain a fully bootable version of the OS X Yosemite installer.

2. Set up the parts of your PC
I covered these steps in my Snow Leopard guide, but they’re worth mentioning again:

NOTE: If you’re installing Mac OS X on a computer that already has Windows installed, you may have to enable AHCI for Windows beforehand. Otherwise, Windows won’t boot afterwards. Also, after installing Mac OS X, you should also sync your clock on Windows with Mac OS X.

3. Set up your motherboard’s BIOS 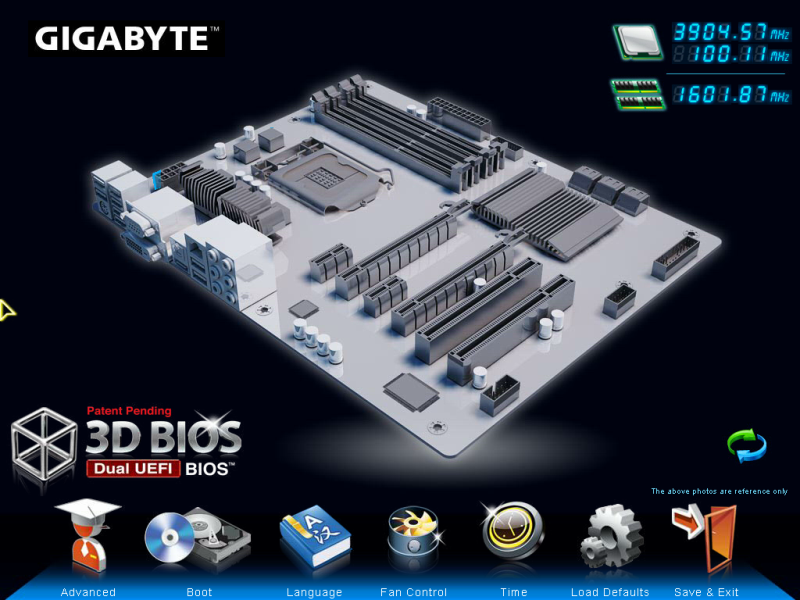 Not sure whether your computer’s motherboard uses BIOS or UEFI? Here’s a quick guide to differentiating between the two: the interface of BIOS is usually monochrome and entirely text-based. Meanwhile, the interface of UEFI usually has pictures, and allows you to use your mouse pointer.

Depending on the brand and standard used by your computer’s motherboard, adjust your settings accordingly:

4. Boot into Yosemite Zone
Restart your Hackintosh, and plug in your Yosemite Zone USB drive. If things go well, your computer will boot from the USB drive instead of booting from your normal hard disk. You will then be able to view the Yosemite Zone menu. 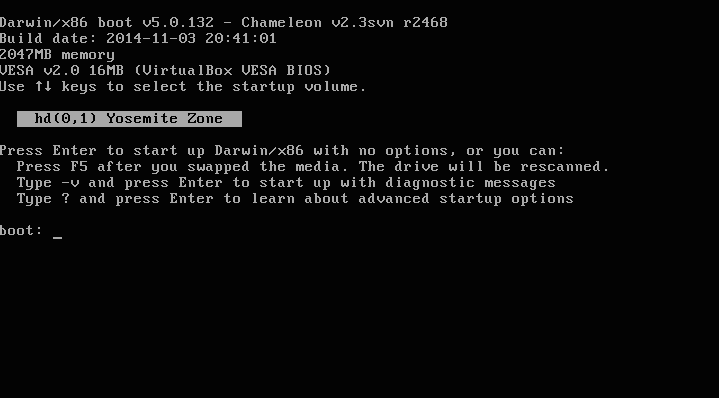 At the Yosemite Zone menu, press the enter key (or return key) to start the OS X Yosemite installer. The installer screen will take several minutes to load. If you are trying to install OS X Yosemite on a computer using an AMD processor, you’ll have to type the boot flag “/amd”, “/amd32”, “/amd64”, or “/amdfx (without quotation marks)– which flag you need depends on your specific processor, so test one flag a time. 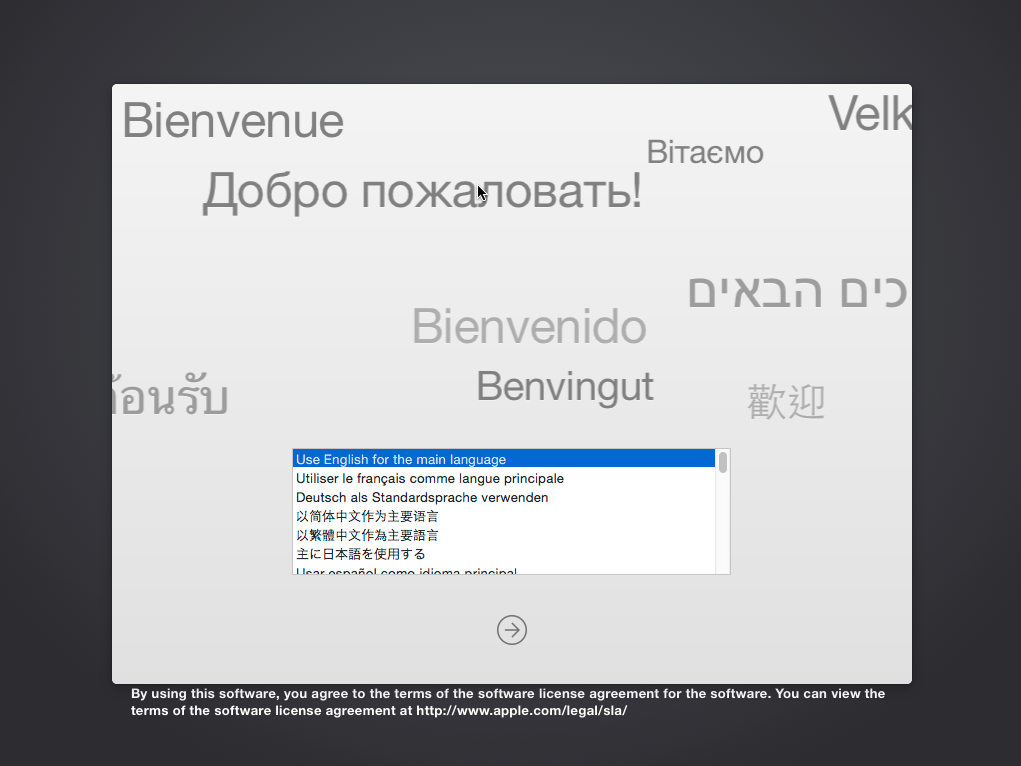 In the worst case scenarios, instead of loading the Mac OS X installer, you may end up at a dark gray screen that tells you to restart your computer (a kernel panic), or you may end up with a small crossed-out sign (a loading error). If you get a kernel panic/loading error (or if the Mac OS X installer simply won’t start within 10 minutes), you’ll need to enter some boot flags. To enter boot flags, manually restart your computer by pressing your computer’s power button. Then, once you’ve booted back into the Yosemite Zone menu, try typing any necessary boot flags before pressing the enter/return key. Check out our list of common boot flags and our guide to fixing boot problems with verbose mode for reference.

5. Install Yosemite
Once you’ve entered the OS X Yosemite installer, you will come up to a hard disk selection page. This is where you choose where you want to install Yosemite. 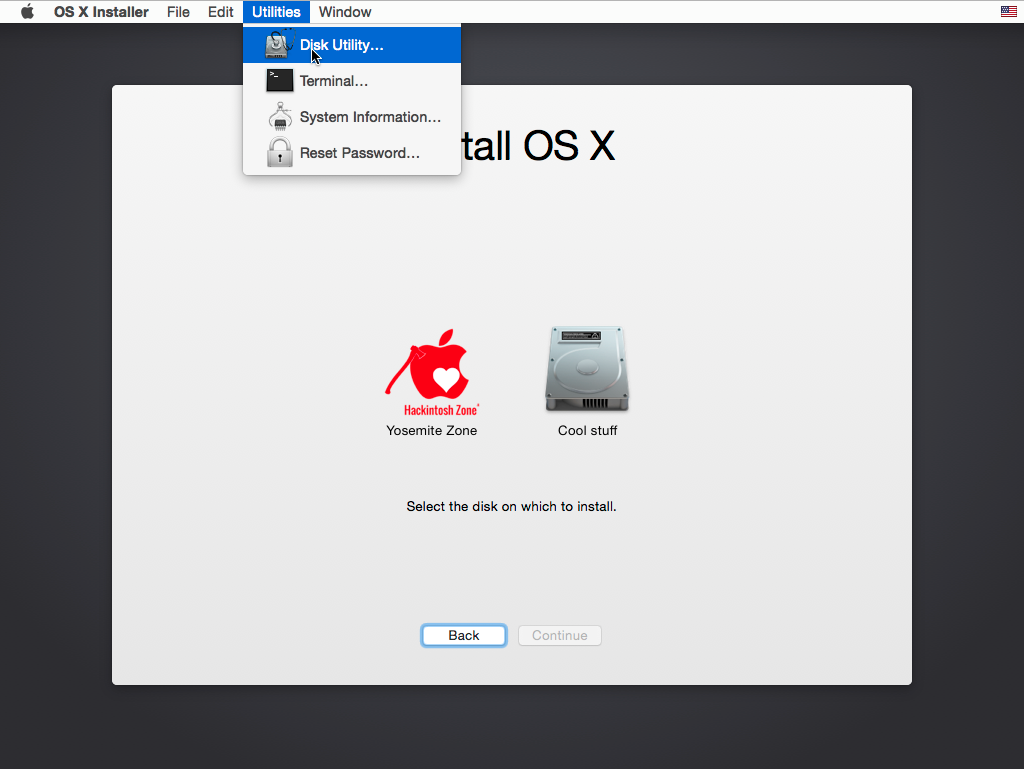 If you’re installing Yosemite on a computer that has never been turned into a Hackintosh before (i.e. doesn’t already have Snow Leopard, Lion, Mountain Lion, or Mavericks installed), there won’t be any hard disk options to select. We’ll have to fix that. To do this, start up Disk Utility, which is located under the Utilities menu in the top bar. 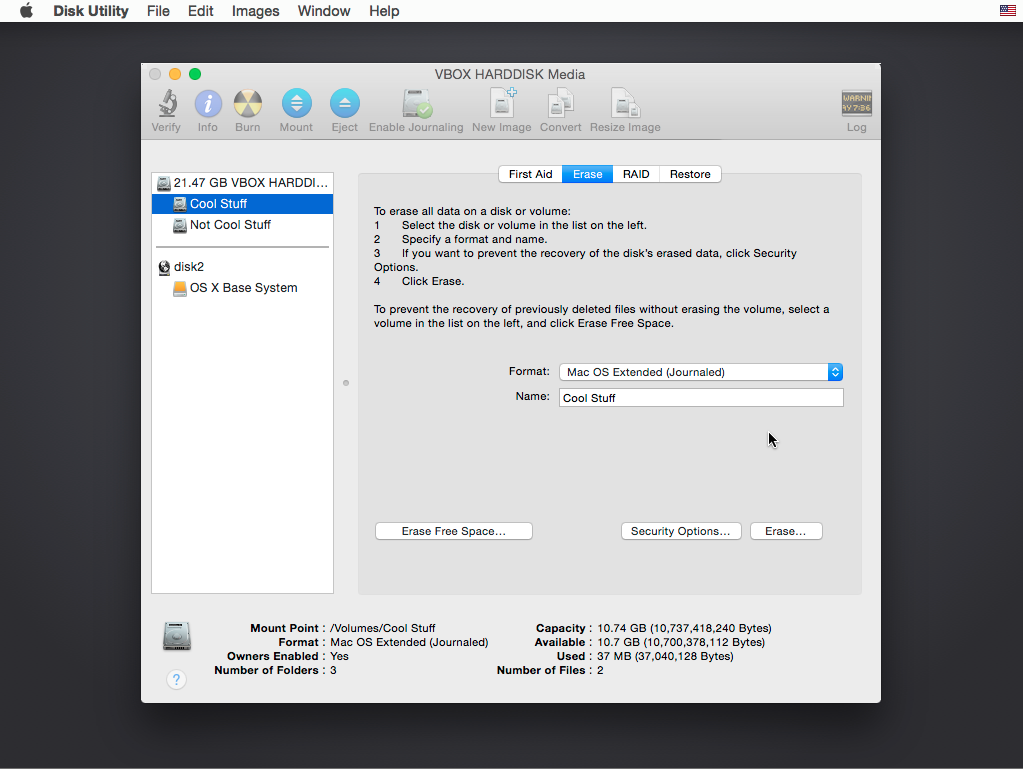 When erasing, the format should be set to “Mac OS Extended (Journaled)”. You can also partition the hard disk by using Disk Utility’s Partition tab.

NOTE: Mac OS X cannot boot from a partition that’s larger than 1 TB in size, so if you have a 2 TB hard drive, you will have to partition it.

On the installation page for Mac OSX, the hard disk/disk partition should now be showing up. Select it, and then click the “Customize” button on the bottom left. This is where using a distro becomes really useful: Yosemite Zone allows you to install extra Hackintosh drivers and kexts, straight from the OS X Yosemite installer. The “Customize” page essentially does the same thing as Multibeast, though the layout (and most of the names of the options) are different. 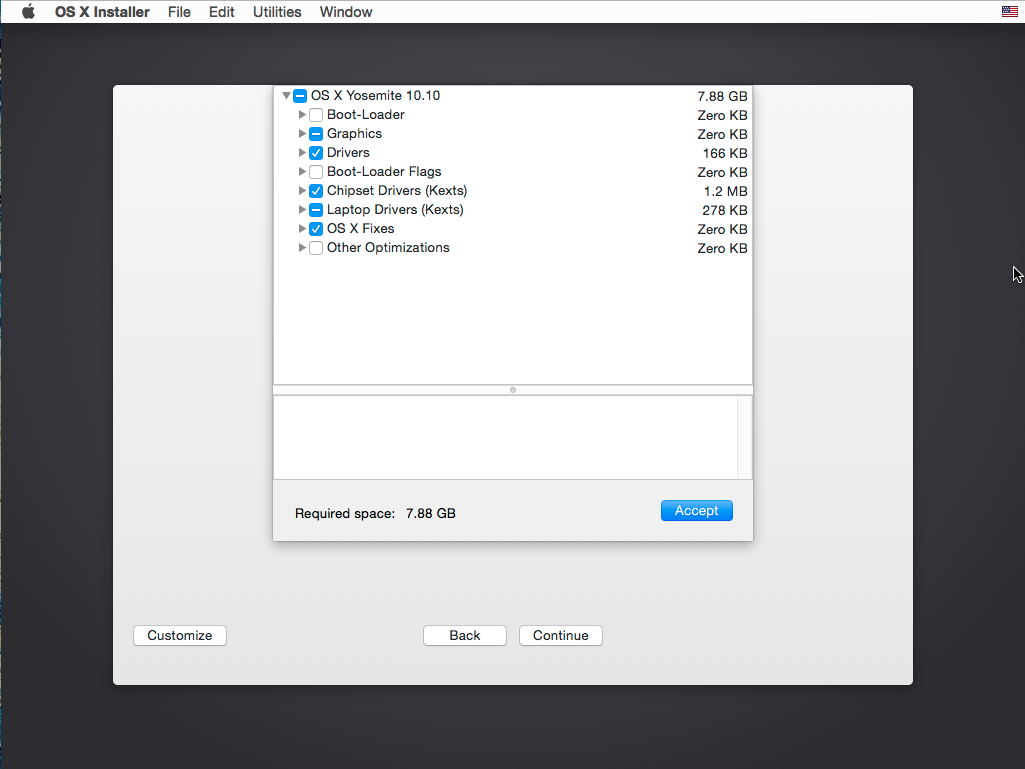 However, choosing the right options from this page can be really tricky, so unless you’re absolutely certain about which drivers and kexts you need to install for your computer, I don’t recommend installing too much stuff from here. The default selection will enable Mac OS X to boot from the hard drive without any assistance, and automatically enable audio and ethernet. For most computers, that will be enough.

If you wish to install more, refer to our guide to Multibeast. Otherwise, you can figure out the rest in Step 7, where you’ll actually set up your Hackintosh with Multibeast.

If your computer already has Mac OS X installed and you are simply updating it to Yosemite, you can just uncheck all of these options. Mac OS X treats Yosemite as just another update– there’s no need to reinstall all of your kexts and drivers. 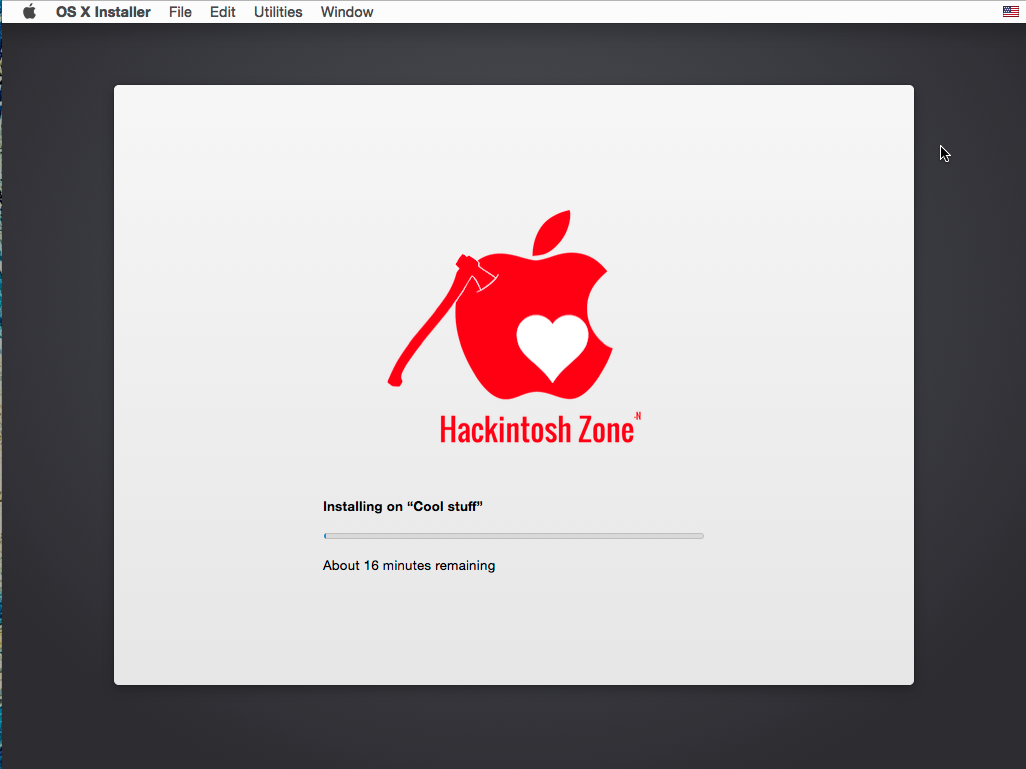 Once you’re done with the “Customize” page, install Yosemite. This will take at least 30 minutes.

6. Boot into Mac OS X
Once the installation finishes, remove your Yosemite Zone USB drive, and restart your computer. At the boot screen, you’ll see an Apple icon for the hard drive where you installed Yosemite. Select it (use the arrow keys on your computer) and press “Enter”. 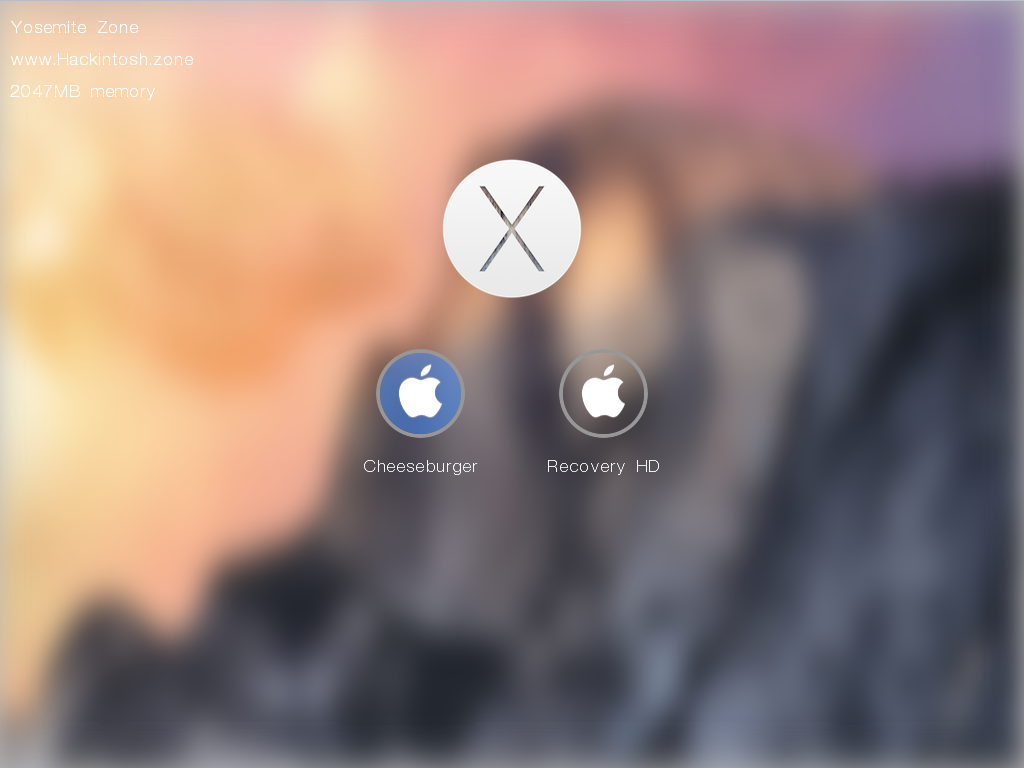 Yosemite will boot. Mission accomplished! Once again, if you get a kernel panic/loading error when you try to boot your new Yosemite installation (or if the installation simply won’t start within 10 minutes), you’ll need to enter some boot flags. To enter boot flags, manually restart your computer by pressing your computer’s power button. Then, once you’ve booted back into the Yosemite Zone menu, try type any necessary boot flags before pressing the enter/return key. Check out our list of common boot flags and our guide to fixing boot problems with verbose mode for reference. 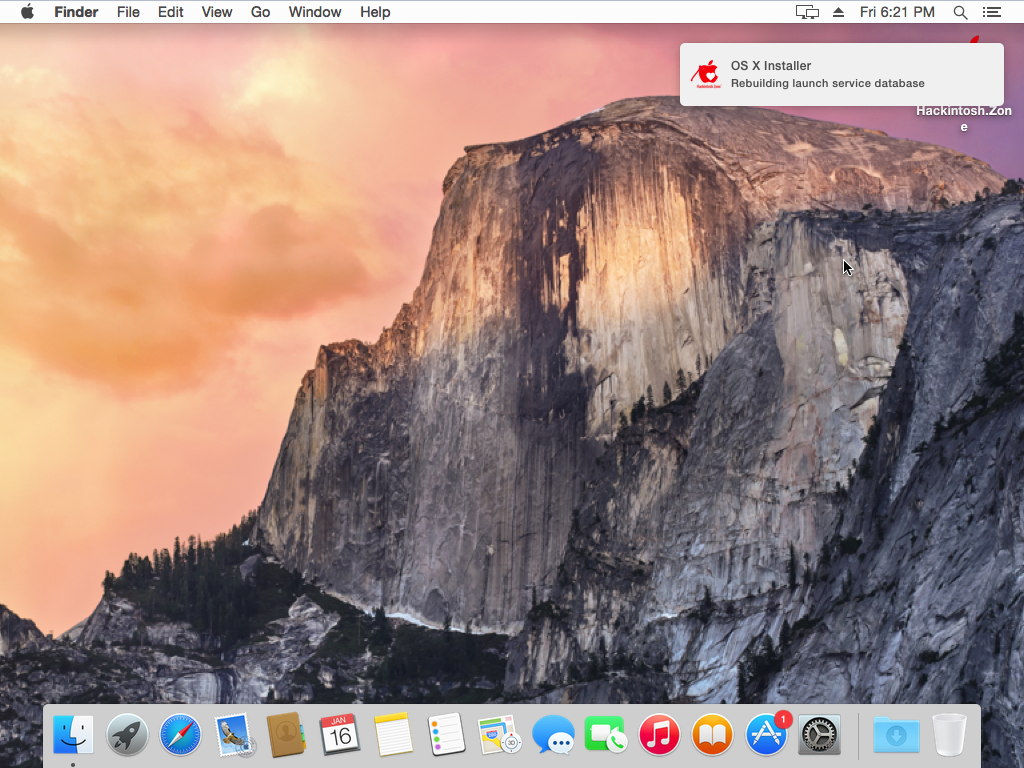 Once Yosemite has booted successfully, click through through the Mac OS X setup screens until you reach the desktop. From here, Yosemite Zone will work its magic, and automatically install the rest of the Hackintosh-specific kexts and drivers from Step 5.

Wait several minutes, while this process works in the background. Once you receive a notification saying that the installation has been completed, restart your computer.

7. Multibeast
Multibeast is a collection of kext files that you’ll need to install for your Hackintoshes to have sound, internet, a high resolution screen, and more. Different Hackintosh builds require different Multibeast setups, though most setups are very similar. Find out what options you need to install by checking our Multibeast guide to OS X Yosemite. 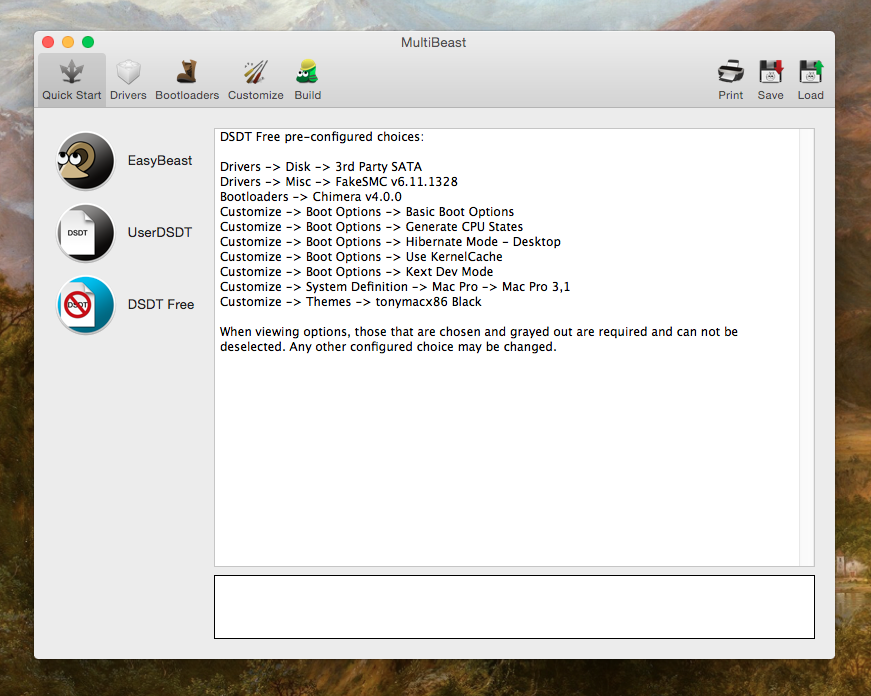 Whether you’re installing OS X on your computer for the first time, or just updating your computer from an older version of OS X, you’ll probably have to run Multibeast after the initial installation of Yosemite.

To run Multibeast in OS X Yosemite, you may have to go the “Security” section of System Preferences in Mac OS X, go to the “General” section, and check “Anywhere” in the “Allow applications” section. After running Multibeast, you’ll also probably want to change your BIOS settings back to normal (from Step 4). 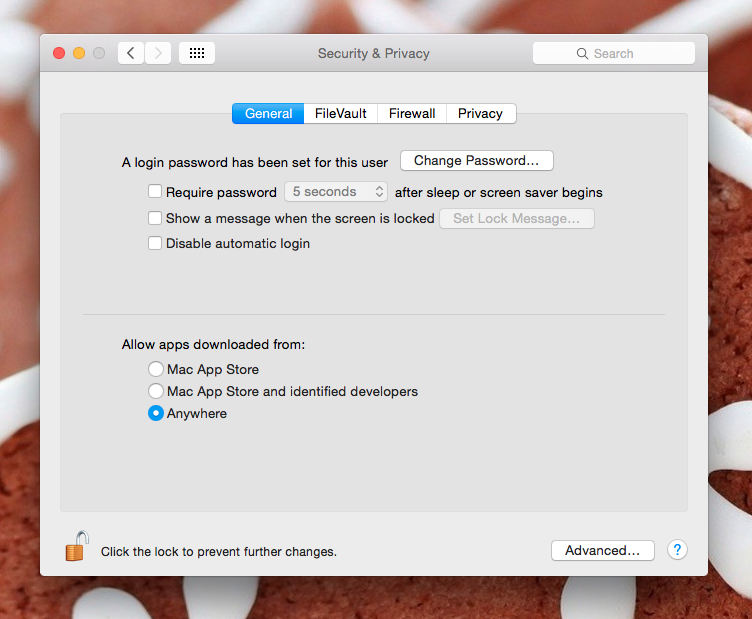 Once that’s done with, you should be running a fully functional copy of OS X Yosemite on your PC. If you plan on updating Mac OS X in the future, check out our guide to updating your Hackintosh. Congratulations!